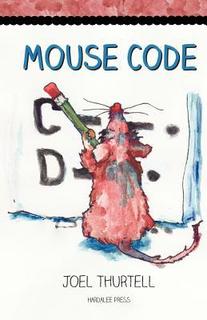 How the field mice invented radio
Come with award-winning newspaper reporter, author and ham radio operator Joel Thurtell as he spins the tale of how mice invented radio to save themselves and their friends the moles, voles, shrews, groundhogs, badgers and yes, even a blue racer, from death by development.

Humans are plowing up meadows and bulldozing trees so they can build houses, shopping centers, gas stations and all kinds of human constructions that displace wildlife.

Enter Hannibal, the wise old field mouse who engineers a system to warn the animals of dangerous human activity.

Hannibal’s disciple, Arthur Mouse, is Hannibal’s loyal foot soldier. At great danger from hawks, snakes, owls and a cat, the two mice steal materials from a ham radio operator so they can build their early warning radios.

MOUSE CODE entertains through its unique story and by offering young people Morse Code as a “secret” language for talking among themselves..

Says veteran ham operator George Petrides Sr., “One test of a story I have always liked is to read it out loud. MOUSE CODE scores a 10 in that category.” Petrides read MOUSE CODE to his 10-year-old grand-daughter, Kaelyn, and reported that she “was instantly captivated by the characters, the plow, the letters V and B, the pompous words, the plight of the mice and (was) able to follow the plot with no difficulty. She could define all of the more difficult words in her own words so she learned vocabulary too. We're already having fun communicating in simple Mouse Code.”