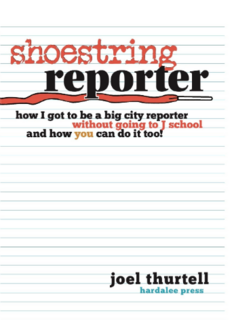 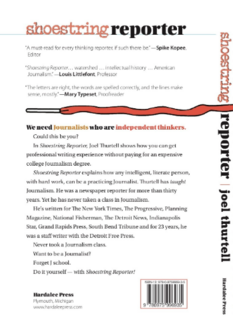 SHOESTRING REPORTER: HOW I GOT TO BE A BIG CITY REPORTER WITHOUT GOING TO J SCHOOL AND HOW YOU CAN DO IT TOO!

The New Yorker runs a long story, "Out of Print," explaining how American newspaper Journalism is going down the drain. The New York Times runs its own version of this mordant tale, "Paper Cuts," arguing that the very medium that carries the article is in its death throes.

Not the people who are practicing it: Their primary challenge is the Internet they so enthusiastically embraced without understanding or planning. Those people don't have a clue how to handle the challenge of the Internet.

But what if things aren't as dire as the papers depict?

Or what if they are facing demise because they believe their own hype?

What if, by believing their own prophesies, they are killing themselves?

Who will save newspapers?

Not the people who own them.

Not the people who run them.

Those people are out to destroy the vessels of their employment.

When we think of newspapers in America, we tend to think of the dailies, the chain-owned papers from the Times on down to small-town dailies. But daily newspapers -- chain-owned newspapers -- are not the sum of Journalism. It's just that they embody, in our collective mind, at least, much of what we think is good in Journalism: the watchdog role, comforting the afflicted and afflicting the comfortable. That is what Journalism should do, whether its parent is the newspaper or some other medium. And when we think of that kind of Journalism, we often think of papers like the Times or The Washington Post or maybe the Los Angeles Times, Chicago Tribune, or The Philadelphia Inquirer.

All in deep trouble.

If newspapers must go, then Journalism at least is worth saving.

No lone person can do it. But many people, with the right mindset, could save Journalism, though the newspapers that have provided employment and a means of transmitting Journalism may disappear.

Journalism will be saved only if many people are inspired to practice the craft of reporting and writing about events, people and social processes they find important. Many of these people are now excluded from the ranks of newspaper Journalists.

If Journalism can be saved, then maybe newspapers too can be revived.

There is a prejudice among orthodox, Journalism school-trained Journalists to look down on those who have not taken the same courses, pursued the same prestigious internships, and won the same coveted awards that produced the conventional practitioners--themselves.

Such people -- orthodox Journalists -- will not save Journalism. The saviors of Journalism will come from outside the industry. They will work their way into the craft (NOT a profession!) and, eventually, take over and transform Journalism.

They will accomplish this feat from outside, at first.. They will become paid part-time reporters -- "stringers" -- on the temporary payroll of newspapers.

How will they do this?

By reading this book, Shoestring Reporter, a manual outlining how people who are armed only with eyes, ears and intelligence can, with forethought and discipline, become paid contributors to newspapers.

Shoestring Reporter is part autobiography, in that it explains how I became first a stringer, then a part-time newspaper editor, then a full-time staff reporter on a medium-sized paper. And finally, I was hired, with no formal academic Journalism training, as a full-time staff reporter at the Detroit Free Press, then (1984) the ninth-largest newspaper by circulation in the nation.

Shoestring Reporter explains how people who don't have a college degree can be paid for reporting news. Why, I knew a stringer at the South Bend Tribune who had two licenses–as a hairdresser!

I believe people who are not tainted by the orthodox thinking of newsgathering institutions could -- if enough of them became involved–save Journalism.

We need many people to write for newspapers from their own personal points of view. We need these people to bring independent, fresh approaches to reporting. We also need to make sure that they don't become corrupted by standard Journalistic thinking.

We may come to see that the current precarious position of many American newspapers is the product of a long process of devaluing newspapers. This process was initiated long ago by the not-so-intelligent bosses who run newspapers. They have unintentionally shown what would happen when they milked newspapers for 20-plus percent returns; laid off valued writers, editors, printers, ad salespeople, photographers and carriers. They dumbed their papers down, reduced content and provoked people to reject their watered-down product. And this is good. Not good for Journalism in the short term, but good for Journalism as well as the public in the long run, because the very people who have killed off the papers will themselves disappear with their corrupt publications, making room for new publishers, whose content and intellectual direction may well be determined by people who read this book and apply its principles.

This book is not aimed primarily at landing outsiders jobs at the big dailies. Though the chain-owned papers -- of which The New York Times is only the best-known of many that are in deep trouble -- are cutting jobs, they still hire stringers. But our focus should be on the smaller papers, the ones that are ignored when the big papers narcissistically focus on their own self-inflicted woes, ignoring those outliers in small communities: the papers that still print their news, don't give it away free on the Internet and remain the only source for reports on the high school marching band and the doings of the town's several churches.

To illustrate: I doubt the hotshot covering the demise of newspapers at The New York Times would think of calling Francie VanderMolen, operations manager at The (Berrien Springs) Journal Era in southwestern Michigan. In summer 2009, I called Francie and said, "Does The Journal Era still hire stringers?"

In 1980, I was editor of The Journal Era. I hired Francie, who had no Journalism training, to attend village council and school board meetings and write reports. I -- or rather, The Journal Era -- paid her ten bucks per meeting, but by sending the same reports to the South Bend Tribune, she was able to make an extra $25 per meeting -- not bad, given the more robust purchasing power of the dollar in that time. Francie later became a full-time staff writer on the Tribune, but has returned to The Journal Era where she started.

My big question so many years after I started writing a primer for stringers was simply, Is it still possible, in these terrible times for newspapers, for someone to start a career in Journalism by working as a stringer?

The answer from Francie is concise: Yes, absolutely. First of all -- surprise, surprise -- small community papers following the ancient business model of printing newspapers on paper with ads and news, then selling them to people who know they can read the ads and news only on paper, well, those newspapers by and large are doing okay. That's not something you'll read in the good old New York Times, but Francie's take on the situation was confirmed by Debra Haight of Niles, Michigan. Debra is a 51-year-old Notre Dame University grad with an economics major who some years ago answered an ad to become a stringer for The  (Benton Harbor) Herald-Palladium. She was hired by a Herald-Palladium reporter, Scott Aiken, and now makes a living by selling her reports to five newspapers.